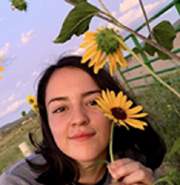 Adrianna’s volleyball and track team relied on her positive and bubbly spirit.  Adrianna was a guiding and empowering teammate. Adrianna excelled in whatever she touched and joined.  Her Church family will miss her immensely. As an auntie to her nieces she made them feel extra special.  Adrianna in her wonderful, beautiful life touched many, many friends and family.  Actually everyone was a friend.

She enjoyed cooking, especially baking, listening to music and hanging out with her friends. Adrianna was the joy in her father’s life and kept him on his toes.  To her brother Adrian she made his whole world.

She was preceded in death by her mother, Rosie Sanchez; her brother, Matthew Cordova; paternal grandparents, Abram and Edwina Cordova; and maternal grandmother, Petrolina Sanchez.

Adrianna is survived by her loving father, Abram (Abie) Cordova; her brothers, Adrian Cordova and Abram "Pancho" Cordova; her maternal grandfather, David Sanchez; her precious nieces, nephews and many other relatives and a host of friends. Adrianna leaves a void in the community of Cuba and Gallina; her family, and friends that will be impossible to fill.

Adrianna's care is entrusted to:

To order memorial trees or send flowers to the family in memory of Adrianna Cordova, please visit our flower store.