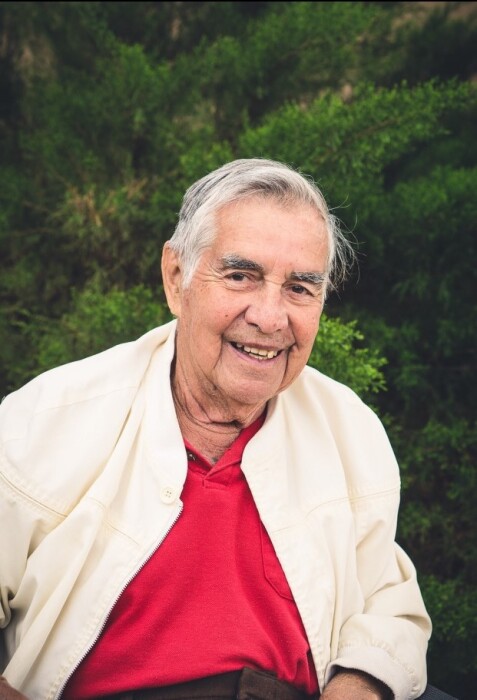 Alonzo Gonzales, 89, beloved husband and father went home to be with the Lord and his

and Adele Gonzales and was a lifelong resident of Albuquerque. Growing up he enjoyed 4H

Club, raising pigs and won 1st prize one year. He also won a raffle with a prize of 100 baby

chicks, his mother was very upset, and the chicks had to be raised on his grandfather's farm in Bernalillo.

He graduated from Albuquerque High and married his love on August 8, 1951. He was a

veteran of the US Air Force, he was a contractor and business owner. He loved football, Go

Biscochitos and dancing with his wife Evelyn. He loved his dog Buddy and always had a good

sense of humor. He was a kind, caring and compassionate man who always had a smile to

He was preceded in death by his beloved wife Evelyn, his parents Alonzo Sr and Adele

The services will be held on September 18, 2021 at Immaculate Conception Church, 619

Copper Ave NW. Rosary at 9 am and mass at 10 am. Interment will be at Sandia Memory

Gardens, 9500 San Pedro NE, Albuquerque, NM 87113, following the mass. Due to Covid there will not be a reception following Interment. Flowers can be sent to Daniels Family Funerals,

9420 Fourth Street NW, Albuq., NM 87114. Alonzo's family would like to give a Special thanks to the VA Community Living Center (CLC)

Hospice medical staff for their compassionate care for Alonzo and all their patients.

To order memorial trees or send flowers to the family in memory of Alonzo Gonzales, please visit our flower store.