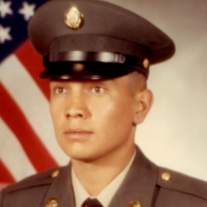 Carlos J. Herrera, age 69, beloved father, grandfather, and brother, passed away Sunday, May 7, 2017.  He was a lifelong resident of Albuquerque.  Carlos was a proud Veteran who served his country in the United States Army, during the Viet Nam War.

He was preceded in death by his parents, Juan and Eufemia Herrera; his wife, Jessica Herrera; and brothers; David and Everest Herrera.

Carlos is survived by his loving children, Charlie Herrera, Suzanne Gonzales and husband Daniel; grandchildren, Sasha, Joanna and Juliana Baca; great-grandchildren Leon, Santiago, Jayla and Joshua.  Also surviving are loving sisters, Adela Lucero, Patsy Sisneros and husband Angelo, and Juanita Garcia; and numerous relatives and friends.  Carlos will be greatly missed by his loving family and by those whose lives he touched.

A Rosary will be recited Wednesday, May 17, 2017 at 7:00 p.m. in the Chapel of Daniels Family Funeral Services - Alameda Mortuary, 9420 Fourth St., NW.  Service of Christian Burial will be Thursday at 9:00 a.m. at Nativity of the Blessed Virgin Mary Church, 9502 Fourth St., NW.  Inurnment will follow at San Carlos Cemetery.

To order memorial trees or send flowers to the family in memory of Carlos Herrera, please visit our flower store.