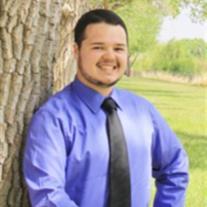 Christopher "Chris" A. Lovato, age 20, beloved son, brother, grandson, nephew, and friend went home to be with the Lord on Saturday, April 25, 2015. He was born on September 16, 1994 in Albuquerque and was a resident of Rio Rancho. Chris graduated from Rio Rancho High School with the class of "2013." He graduated with honors and consistently made the "Deans List" at CNM and was starting UNM in the fall.
Chris was polite, humble, kind hearted, compassionate, and patient. He was selfless, always putting others before himself especially his mother Angela and his sister Kirastin. He enjoyed spending time with his father Chris Sr. They shared many similar interests and will have an everlasting bond. He was extremely humble and never complained. He was calm and was always our sense of reason. Chris was our walking encyclopedia, we always turned to him for explanation. His smile and laughter were contagious and it was hard not to smile when he was around. Chris had a unique and witty sense of humor. You never new if he was laughing with you or at you. He liked being unique and wasn't afraid to stand out; whether rocking a top hat with his trench coat, playing his jew harp in the airport or dressing up in his suit and tie. When someone told him he looked handsome he was quick to reply "I know," and when asked why he wore a top hat he replied "Cause I'm a gentlemen and only gentlemen wear top hats."
Chris loved Marvel Comics, anime, Dr. Who?, collecting comics, reading, playing video games, raiders football, and spending time with his friends. His friends were very special to him and were a major part of his life.

He is survived by his mother Angela Apodaca, father Chris Lovato, sister Kirastin Lovato, brothers Jordan Lovato and Andru Morales and many other loving relatives and friends. Chris will be greatly missed by his loving family, friends, and by those whose hearts he touched.

To order memorial trees or send flowers to the family in memory of Christopher Lovato, please visit our flower store.