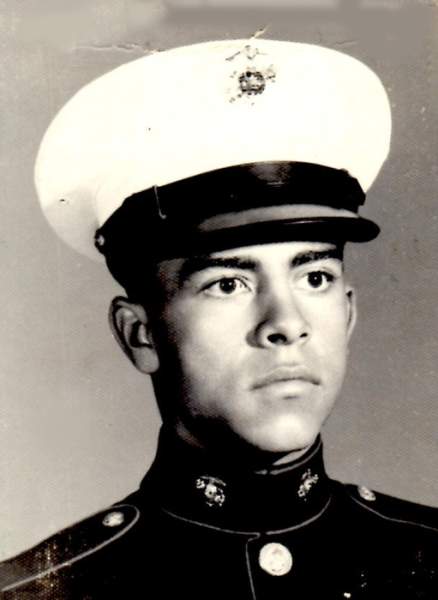 Crescencio M. Martinez, age 67, beloved husband, father, and grandfather passed away peacefully Wednesday, April 11, 2018. He was born in Albuquerque, NM on May 22, 1950, and was a resident of San Ysidro, NM.  Crescencio was a proud Veteran of the United States Marine Corps, who honorably served his country during the Vietnam War and was a recipient of the Purple Heart.  After serving in the military, Crescencio worked as a mail courier for the United States Postal Service.  He enjoyed fishing, camping, and leather work.

He was preceded in death by his parents, Ramon and Sadie Martinez.  Crescencio is survived by his loving wife, Barbara G. Martinez; his children, Eric, Lysa, Cres Martinez, Jaime and Lyle Peralta; nine grandchildren; and four great-grandchildren; and many other loving relatives and friends.  Crescencio will be greatly missed by his loving family and by those whose lives he touched.

The Martinez family will receive family and friends Wednesday, April 18, 2018 from 5:00 p.m. to 6:00 p.m. in the Chapel of Daniels Family Funeral Services - Alameda Mortuary, 9420 Fourth St., NW in Albuquerque, where a Rosary will be recited at 6:00 p.m.  Mass of Christian Burial will be celebrated Thursday at 10:00 a.m. at San Ysidro Catholic Church in San Ysidro, NM.  Interment will follow at Santa Fe National Cemetery at 2:15 p.m.  Casket Bearers will be Scott Martinez, Allen Montano, Bryan Montano, Abe Montano, Pete Montano and Michael Solano.

To order memorial trees or send flowers to the family in memory of Crescencio Martinez, please visit our flower store.

Gathering of Family and Friends