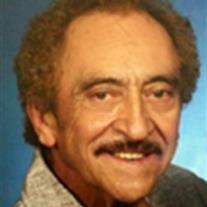 Dale B. Rodriguez, age 73, beloved and devoted husband, father, and brother, was embraced by the Lord and taken to Eternal Life, Sunday, February 8, 2015, while surrounded by his loving family.   He was a resident of Albuquerque, NM; and a member of St. Jude Thaddeus Catholic Church.
He was preceded in death by his parents, Esperanza and Stella

Visitation will be Thursday, February 12, 2015 from 5:00 p.m. to 6:00 p.m. at St. Jude Thaddeus Catholic Church, 5712 Paradise Blvd., NW, where a Rosary will be recited at 6:00 p.m.  Mass of Christian Burial will be celebrated Friday, February 13, 2015 at 10:00 a.m. also at the Church.  Interment will follow at Mt. Calvary Cemetery.  Casket Bearers will be Shawn Martinez, John Paul Gutierrez, Tom Droelle, Orlando Dow, Christopher Gutierrez, and Rey Quintero.  Honorary Casket Bearer will be Matthew Rasmussen.

To order memorial trees or send flowers to the family in memory of Dale Rodriguez, please visit our flower store.