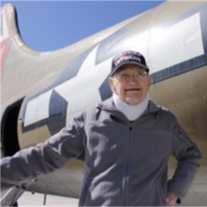 ’Twas on 30 August 1924 that David in his good fortune emerged into this world in Brooklyn, NY, a place that has forever after remained enshrine in his heart!  But at age eight, in 1933, he came to share that passion with his new home, the enchanting state of New Mexico, spending the next several years in Santa Fe, Magdalena, Clovis, and Silver City.  Then a series of moves saw him complete his high school education in Fort Worth, Duluth (Minn) and Washington, DC.

Volunteering in the Army, World War II took him to Europe as an aircraft radio repair specialist, first in England with the Mighty 8th Army Air Force and then in France with the 9th AAF (where he began a love affair with the Douglas A-26 Bomber).  The subsequent GI Bill helped him through Yale, there he served as manager of the track team under Olympic Coach Bob Giegengack (G-George-i-e-G-George-e-n-G-George-a-c-k).

A number of years with AT&T followed.  He had worked for AT&T prior to and after his WWII military service and during his Yale summers as a craftsman (installer, cable splicer, central office).  Hence, after graduation he continued with them for several years in management positions.  The highlight of that was the introduction to the gorgeous Shirley Anne Conrad, a computer operator in the first customer toll dialing center of its type in the Bell System.  That introduction culminated in a September 1955 wedding in Camp Springs, MD.

A subsequent job with ITT took Dave, Anne and their children first to Oakland, NJ, and then to Bellevue, NE, where he ultimately served as the company’s director of the company control upgrade project for the USAF Strategic Air Command (at the time the world’s largest such computer/communications project). Upon completion of that, he finally returned, with family, to his cherished New Mexico in 1972, selling large-scale Christmas decorations in the Southwest (city streets, shopping malls, etc.) as a representative of Santa Clause, while on the side marketing electronic warfare and military laser systems for General Telephone (GTE).

In another military capacity, he also served with the ABQ/Bernalillo County Office of Emergency Preparedness, ultimately retiring from the USAF Reserve as a major.  That NM sojourn ended with a family death in the East, which returned him to Washington, DC and thence to a job with the Royal Saudi Naval Forces in Jubail, Saudi Arabia.  After two years “solo” with the RSNF, he moved to another job in the Kingdom, now with wife Anne along, where they stayed for four years.  Initially, on the King Khaled International Airport project he was superintendent of airfield communications maintenance, and later with the Jubail Industrial City project, then the world’s largest civil engineering project.  The final return trip to the USA took him and Anne to the notorious Swat Valley and the Shalimar Palace of Pakistan where they also visited friends acquired in the Kingdom.  That visit was also marked by an SUV jaunt across the Karakoram Mountains to Kashgar, westernmost China Later visits followed with friends in Thailand and the Philippines.

Back in Albuquerque, he rejoined Sandia Labs as a contract technical writer at their nuclear reactor facility.

Retirement was not in Dave’s vocabulary.  He devoted over 12,000 hours at the Veteran’s Hospital transporting patients through the facility and countless hours with the Veterans Memorial Park.  He was an active member of the Nativity of the Blessed Virgin Mary Church, which he characterized under Father Juan Mendez as his all-time favorite church.  He loved music and played several instruments.  He was a skilled craftsman who enjoyed building things, such as a trolley playhouse for the grandchildren he doted on.

David was a kind and gentle man who loved and fully lived the prayer of St. Francis.  He was an instrument of peace, a truly charitable man who donated generously of his time and resources.

He never was one to stay still, and he and his sidekick Anne made annual cross-country treks, attending his 896th Army Reunions. They had a great time at his last reunion in May 2017.

David’s incredible earthly adventure ended Saturday, June 10, when he passed away in route to hospice directly in front of Nativity Church at 5:00 pm, the exact moment he would have been arriving for mass.  He must have told the driver, “You can let me off here, I’ll fly the rest of the way home.”

A Rosary will be recited Thursday, June 15, 2017 at 7:00 p.m. at Nativity of the Blessed Virgin Mary Catholic Church, 9502 Fourth St., NW in Albuquerque.  Mass will be celebrated Friday at 9:00 a.m. also at the Church.  A reception will then follow the services.

In lieu of flowers, the family requests Memorial contributions be made to Nativity of the Blessed Virgin Mary Catholic Church, 9502 4th Street, Albuquerque, NM 87114 or St. Jude Children's Research Hospital.

The Family wishes to express their sincere gratitude to all our friends both near and far for your kind and thoughtful cards, messages and comforting hugs.   Father Juan and Bishop Tafoya of the Nativity of the Blessed Virgin Mary Church for your uplifting Mass and prayers with beautiful personal stories of David.  Robin and choir for the perfect music selections, especially closing with "When the Saints Go Marching In".  Rose and volunteers for all the behind the scene work you did; and for the foods delivered to make David's tribute run so perfectly.  To my Thimbleweed quilting friends for bringing your delicious fruits, casseroles and comfort.  Thanks to Daniels Family Funeral Services - Alameda Mortuary for the respect and compassion shown at this difficult time.  We appreciate the Kirtland Air Force Honor Guard for their patriotic send off and the touching bugle call of TAPS.

To order memorial trees or send flowers to the family in memory of David Townsend, please visit our flower store.