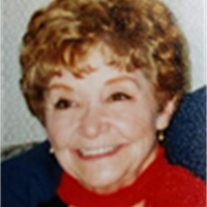 Dolores Marie (Griego) Buchanan - Jesus swung down His sweet chariot and took Dolores to His heavenly mansion on December 10, 2015.   She was 85 years old.  Dolores was born to Miguel and Cleofes Griego in Corrales New Mexico on March 23, 1930.  Dolores has left a beautiful legacy of musical compositions and arrangements that she mastered through singing in three part harmony with her two sisters.  Her creative, musical mind is still remembered and appreciated by all the family.

She was preceded in death by her husband, Jack Buchanan; son, Martin Walters; daughter, Shelley Heard; and grandson, Martin Walters Jr.  Also to greet her at heaven's gates will be her two singing partners and beloved younger sisters, Marion Rell, and Sally Putman, Sister Fedelina Baca; brothers, Christino and Robert Griego will also be there to rejoice in her coming home.  Dolores is survived by her loving daughter, L. Denise Beasley (Terry); sisters, Neita Gutierrez (Loyola), Vijies Saiz; and brother, Mike Griego (Chrissy); her grandchildren; numerous nephews, nieces, and other relatives who will miss her greatly.

A Celebration of Dolores' Life will be held on Saturday, January 9, 2016 at 11:00 a.m. at Daniels Family Funeral Services - Alameda Mortuary, 9420 Fourth St. N.W. Followed  by a reception and fellowship.  At the family's request, in lieu of flowers, Memorial Contribution may be made to the Alzheimer’s Association, c/o 9500 Montgomery Blvd., NE, Ste.#121, Albuquerque, NM 87111.

To order memorial trees or send flowers to the family in memory of Dolores Buchanan, please visit our flower store.