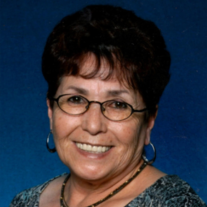 Dora A. Montoya, age 70, beloved mother, grandmother, and sister, passed away Thursday, May 5, 2016.  She was born in Clovis, NM and was a resident of Albuquerque, NM.   Dora attended Our Lady of Sorrows School and graduated in 1965.  She studied diligently and received her Massage Therapist License, and was still working for Peak Motion for 20 years. Dora enjoyed spending time with her family, fishing, and on her spare time enjoys going to the casino.

She was preceded in death by her husband, Bonifacio Montoya Jr; her parents, John and Cleotilde "Tillie" Urioste; and grandson, Mathew Romero.

Dora is survived by her loving sons, Ruben Montoya, Robert Montoya and wife Diane Romero-Montoya; ten grandchildren; six great-grandchildren; brothers, Johnny Urioste Jr. and wife Olympia, Michael Urioste and wife Linda; and sister, Mary Jane Tapia; and many other relatives and friends. Dora will be greatly missed by her loving family and by those whose lives she touched.

To order memorial trees or send flowers to the family in memory of Dora Montoya, please visit our flower store.