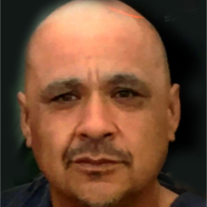 Eddie F. Avila, age 39, beloved son, companion, father, and brother, was embraced by the Lord and taken to Eternal Life, Thursday, September 29, 2016. He was lifelong resident of Albuquerque, NM.  Eddie enjoyed the outdoors, the mountains, hunting and riding at Nine Mile Hill, and especially spending time with his five sons.

Eddie is survived by his loving mother, Priscilla Mullins and husband Rick of Truth Or Consequences, NM; his best friend and companion of 21 years, Sabrina Urias; his six sons, Andrew, Angelo, Alonzo, Adrien, Avery and his unborn son due in December; his siblings, Tara Torres and husband Stefan, Miguel and Jordan Mullins.  Also surviving are his maternal grandparents, Frank and Hope Torrez; his paternal grandmother, Isabel Avila; and many other relatives and friends.  Eddie will be greatly missed by is loving family and by those whose lives he touched.

Visitation will be Friday, October 7, 2016 from 7:30 a.m. to 8:00 a.m. at Nativity of the Nativity of the Blessed Virgin Mary Church, 9502 Fourth St., NW, where a Rosary will be recited at 8:00 a.m. followed by the Mass at 9:00 a.m.  Interment will follow at Mt. Calvary Cemetery.  Casket Bearers will be Richard Garcia, Steven Salas, Frank Torrez, LJ Nevarez, Kaki Miyamoto, and Louis Montano.  Honorary Bearers will be Martin Torrez, Ray Avila, Robert Urias, Stefan Torres, Miguel Mullins, and Israel Nava.

A reception will follow at Nativity of the Blessed Mary Parish Hall.

To order memorial trees or send flowers to the family in memory of Eddie Avila, please visit our flower store.