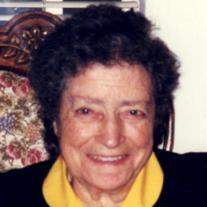 Elsie Mary Salas, born in Pena Blanca, NM on November 18, 1921 to Bernardita (Armijo) and Gregorio Salas, passed away peacefully seven days after her 94th birthday on November 25, 2015.  In 1938 at the age of 17 her mother passed away leaving ten children behind.  Elsie being the second eldest, she and her older sister, Ruperita decided that Elsie would stay home from school to care for her siblings while Rupertita finished high school.  Rupertita graduated and then they reversed roles, allowing Elsie to graduate at the age of 20.  After her father remarried she followed her older sister to California.  She resided in San Francisco and joined the war effort working full time at Mare Island in Vallejo.  From about 1957 to 1974 the family resided in the South of Market neighborhood, where Elsie was active in the Canon Kip Mothers Club, worked in the office at Bessie Carmichael Elementary School, and worked for the Economic Opportunity Council from 1967 until she retired.  Elsie was politically active in the 60's and joined the marches and protests to bring about equal opportunity for all.  In 2006 at the spry age of 85 Elsie decided to return to New Mexico where she resided until her death.

To order memorial trees or send flowers to the family in memory of Elsie Salas, please visit our flower store.