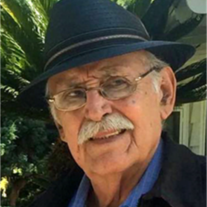 Enrique R. Cervantes, age 89, beloved and devoted husband, father, and grandfather, passed away peacefully, Sunday, January 8, 2017.   He was born in Los Angeles, CA and was a resident of Albuquerque, NM.  Enrique retired in 1986 after working for 34 years as a long distance truck driver for A & B Garment carriers in Los Angeles, CA.

To order memorial trees or send flowers to the family in memory of Enrique Cervantes, please visit our flower store.