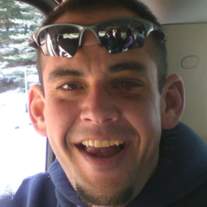 Eric David Hogue, age 41, resident of Rio Rancho, NM, lost his battle to kidney disease, and went home to be with the Lord, with his family by his side, Eric took his last breath on earth and his first breath in heaven on Saturday, April 1, 2017.    Eric was born September 14, 1975 in Santa Clara, CA.   He was a loving son, grandson, brother, nephew, and cousin.  He loved riding his dirt bike motorcycles, fishing, watching Pawn Stars, the History channel, and all types of movies.  He was also an avid Pittsburgh Steelers fan.  He was always smiling and was very caring.  Although he has gone to be with our Lord, we will always love and miss him very much.  Eric was preceded in death by his dad, David Hogue; his uncle, Toby Herrera; great grandparents, Cornelio and Antonia Herrera, Juan and Elvira Avila; great uncle, Joe Avila; and step-grandma, Percilla Valdez.  He is survived by his mom and stepdad, Patricia and Luciano Valdez of Rio Rancho, NM; sister, Nicole Hogue of Rio Rancho, NM; grandparents, Manuel and Viola Herrera of Rio Rancho, NM; uncles and aunts, Manuel Herrera, Jr. of Albuquerque, NM, Gloria and Charles Chapman of Campbell, CA, and Robert and Sharon Herrera of Pflugerville, TX; step-grandpa, Ross Valdez of La Jara, NM; and many cousins and friends.  The family would like to thank, Ymelda, of We Care for picking him up and taking him to dialysis; DCI Dialysis in Rio Rancho, and lastly to the paramedics, doctors and nurses at UNM Hospital for the excellent care they gave to Eric.  A Rosary will be recited on Thursday, April 6, 2017 at 7:00 p.m. at Saint Thomas Aquinas Catholic Church, 1502 Sara Rd SE, Rio Rancho.  Mass of Christian Burial will be celebrated on Friday, April 7, 2017 at 11:00 a.m. at Saint Thomas Aquinas Catholic Church, 1502 Sara Rd SE, Rio Rancho.  Interment will follow at Vista Verde Memorial Park.
Eric's care is entrusted to:
Daniels Family Funeral Services
ALAMEDA MORTUARY
9420 Fourth St. NW
Albuquerque, NM 87114
(505)  898-3160

To order memorial trees or send flowers to the family in memory of Eric Hogue, please visit our flower store.