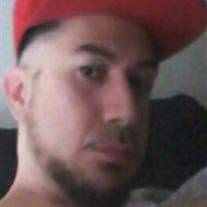 Ernest Jaramillo, age 33, beloved son, brother, and grandson, passed away unexpectedly,  Friday, July 24, 2015.   He was a lifelong resident of Albuquerque, NM.  Ernest enjoyed the outdoors, animals and listening to music.  Ernest was a good cook and loved cooking for his family and friends.   Ernest will always be fondly remembered by his great sense of humor and witty come backs.

A Rosary will be recited Friday, July 31, 2015 at 8:00 a.m. at Nativity of the Blessed Virgin Mary Catholic Church, 9502 Fourth St., NW, where the Service of Christian Burial will be at 9:00 a.m.  Interment to follow at Sandia Memory Gardens.

To order memorial trees or send flowers to the family in memory of Ernest Jaramillo, please visit our flower store.