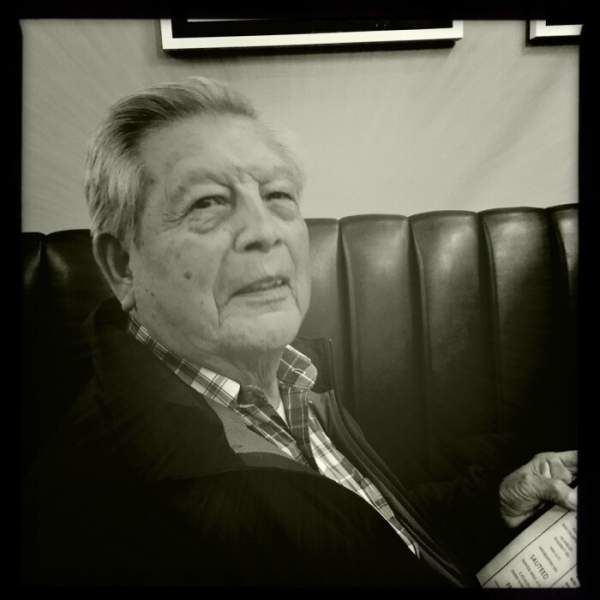 Eugenio, “Gene” Rios, 98, passed away peacefully in the early morning of April 8, 2021 at his daughter’s and son-in-law’s home in Los Ranchos, where he lived for the past 4 years. He was born on February 20, 1923, in Grant County. Upon graduation from Cobre High School, he enlisted in the U.S. Army and fought in New Guinea during the World War II. Upon discharge from the army, he moved to Albuquerque. He attended business school, married his wife Therese, and went to work at Sandia Labs, where he remained until retirement. He is survived by his daughter Mary Ann Garcia-Word and her husband, Terry Word.

Grandchildren: J. Jarrett Garcia of Albuquerque, and his daughter Grayson, Jettie Word of Oakland CA, Terrence Rios Word of Durango CO; step-grandchildren: Zachary Hector Word, his wife Erin and their daughter Kate of Traverse City, MI and Morgan Costello, her husband Pete and children Ronan and Conor of Albany, NY. He also leaves behind many nieces, nephews and cousins, notably his niece Petra Davis-Johnson and her husband Todd from Tustin, CA and first cousin Christine Bruno and her daughter Ellen Michaelis of Kingston, NY, with whom he remained close touch with and often visited.

If you ever had the good fortune to meet him, you know what a special man he was. Gene was a man of few words but was always one to offer sage advice. He was pragmatic but inquisitive to the end, asking questions and marveling at the wonders of life. Those who helped to make his last few years comfortable quickly became “family”. His family would like to thank: Mago Chairez, Lydia Dominguez, Nigel Waites from the VA, and Eric Anderson RN, of Compassus Hospice Care, who provided him wonderful care in his last months. Gene worried about those he cared for. Strangers were befriended. He gave what he could and more. A child of the Depression and a WW II Army veteran who served in the pacific, He was truly one of the last of the Greatest Generation.

He loved to listen to music: Pepe Aguilar, Vicente Fernandes, Doris Day, Louis Armstrong, and gospel. He was never one to turn down good deal bargain. Always hopeful, Gene also never met a lottery ticket or a slot machine he didn’t like. He loved to take walks and was known to pick up every penny he spotted on his path.

He is preceded in death by his wife Therese Marie Amiot Rios of Paris, France, his parents, Ysabel Reyes and Norberto Rios of Lagos de Moreno, Mexico, and his three sisters: Margarita, Anita, and Ramona. From his humble beginnings in a small shack in Santa Rita, NM, the son of two immigrants from Mexico, Eugenio Rios amassed a tremendous wealth. Wealth that came from the relationships he forged through his acts of kindness, compassion, and love.

Mass of Christian burial to be celebrated on Friday 16, 2021 at 10:00 am, Our Lady of Guadalupe Catholic Church. Interment at 12:00 pm at Mount Calvary Cemetery.

To order memorial trees or send flowers to the family in memory of Eugenio "Gene" Rios, please visit our flower store.

Our Lady of Guadalupe