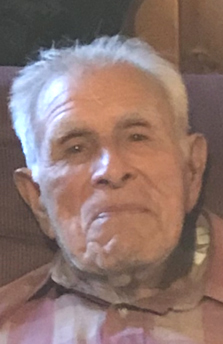 Eulogio M. Sanchez, age 98, beloved father, grandfather, and brother, passed away peacefully Friday, July 20, 2018.  He was a lifelong resident of Albuquerque, NM.  Eulogio served his country in the United States Army during World War II as a Demolition Specialist and a Medical Tech from April 27, 1940 to October 8, 1945.  After which he went to work for Brooms Furniture traveling back and forth from Albuquerque to California.  He then went to work for Kirkland AFB as a Firefighter, where he retired as a crew chief.

He was preceded in death by his first wife, Rita Archuleta; and by his second wife, Ruby Sanchez.  Eulogio is survived by his loving son, Jose M. Sanchez and wife Guadalupe; and two grandsons, Marcos and Jacob Sanchez.  Also surviving are his brothers, Juan, Cirilio, Melecio, Ricardo; his sisters, Virginia Zepeda and Eloisa Vilescas; including multiple step-children, David, Richard, and Reyna Luna; and numerous nieces, nephews, and other relatives and friends.  Eulogio will be greatly missed by his loving family and by those whose lives he touched.

Visitation will be Thursday, July 26, 2018 from 6:00 p.m. to 7:00 p.m. in the Chapel of Daniels Family Funeral Services - Alameda Mortuary, 9420 Fourth St., NW, where a Rosary will be recited at 7:00 p.m.  Mass of Christian Burial will be celebrated Friday at 9:00 a.m. at Nativity of the blessed Virgin Mary Catholic Church, 9502 Fourth St., NW.  Interment will follow at Gate of Heaven Cemetery.  Casket Bearers will be Jacob Sanchez, Christopher Gallegos, Marcos Sanchez, Bobby Lucero, Roy Luna and Raymond Gallegos.  Military Honors will be accorded by American Legion Post #69 Honor Guard.

To order memorial trees or send flowers to the family in memory of Eulogio Sanchez, please visit our flower store.