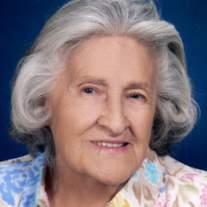 Frances F. Zimmerly, 94, passed away surrounded by her loving family on Sunday, October 23, 2016 in Corrales, New Mexico where she resided with her daughter, Patricia Zimmerly. Frances was born to Ezequiel J. Gutierrez and Aurelia Montoya Gutierrez, on March 6, 1922 in Old Town Albuquerque, New Mexico.

Frances was raised in Old Town and attended St. Mary’s school and graduated from Albuquerque High School in 1940. In March 1942 until May 1947 she worked for the Selective Service System as a draft board clerk. From September 1947 to October 1948 she worked at Sandia Base Engineers as a clerk in the warehouse. On October 18, 1948 she married Justin Zimmerly of Socorro, New Mexico at San Felipe de Neri Church. She and Justin were married for 49 year when he passed away in May 1997. After raising seven children she graduated from TVI with an associate degree in 1971. She found employment at Mountain Bell in the accounting department and retired from there in 1981. She has been a loving mother, grandmother, great-grandmother, chief cook, chief dishwasher, house keeper, bookkeeper, etc. etc. etc.  Frances is a direct descendent of Bartolome de Montoya and Cristobal Gutierrez, and a tenth generation New Mexican.
A rosary will be recited on Sunday, October 30, 2016 at 4pm in the Daniel’s Mortuary Chapel.  A Mass of Christian burial will be celebrated at 9 am, Monday, October 31, 2016 at Nativity of Blessed Virgin Mary on 4th Street, followed by interment at 3pm at Santa Fe National Cemetery. Pall bearers will be Stephen Zimmerly, Tim Zimmerly, Felipe Mares, Adam Dimas, Stephen Joshua Zimmerly, Vincent Dimas; honorary pall bearers will be Ruben Mares, Scott Carter and Samuel Zimmerly.

To order memorial trees or send flowers to the family in memory of Frances Zimmerly, please visit our flower store.