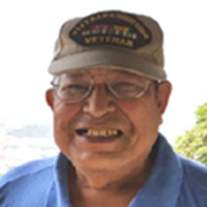 Francisco Aguirre, age 74, beloved father, grandfather, and brother, was embraced by the Lord, Tuesday, September 26, 2017 and taken to his heavenly home. He was born in Temple, TX on August 21, 1943 and was a resident of Alamogordo, NM.  Francisco was fondly known as Frank to many who were touched by his contagious smile.   He was a proud Veteran who served his country in the United States Air Force during the Vietnam War and Operation Desert Storm.  During the time spent in the service he received various medals and awards.  Frank received his Masters degree from Sul Ross State University and was a Professor for New Mexico State University.  He enjoyed traveling, gardening and spending time with his   family and friends.

He was preceded in death by his parents, Eugenio and Maria Aguirre; his beloved wife Linda Mary (Lopez) Aguirre; and a brother, Domingo Aguirre.

Francisco is survived by his loving children, Francisco Javier Aguirre of Colorado Springs, CO, and Cristina Maria Aguirre-Rodriguez of Alamogordo, NM; and his precious granddaughter, Linda Marie Rodriguez.  Also surviving are his loving siblings, Mario Aguirre and wife Christella, Martin Aguirre and wife De Maris; Natalie Ohnesorge and husband Danny, Sister Pauline Aguirre FHM, Mary Tallouzi; sister-in-law, Cathy Aguirre; and many other loving relatives and friends.  Francisco will be greatly missed by his loving family and by those whose lives he touched.

A Rosary will be recited Tuesday, October 3, 2017 at 7:00 p.m. in the Chapel of Daniels Family - Alameda Mortuary.  Mass of Christian Burial will be celebrated Wednesday at 9:00 a.m. at Nativity of The Blessed Virgin Mary Church. Interment will take place at a later date in Ft. Worth, TX where he will be rejoined with his beloved wife Linda.

To order memorial trees or send flowers to the family in memory of Francisco Aguirre, please visit our flower store.