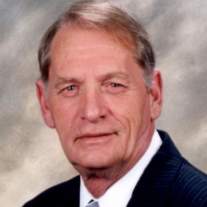 Garner Franklin Parker, age 75 was called home by our Lord on July 3, 2016. He is preceded in death by his parents and his brother Rondald.

He is survived by his loving wife Trudy and his grandchildren Jack William and Marina Kate, step-daughter Maggie Gleeson and husband Bill of Lone Tree, Colorado, sister Lavita Broadhurst and her family of Dallas, Texas, brother-in-law Alexander Bazáb and family, and Trudy’s aunt Mrs. Sylvia Apodaca.

He was born in Dallas, Texas and grew up in Irving, of which he would emphatically say was the “Home of the Dallas Cowboys.” He was an avid fan for 38 years. He was excited about the Cowboys going to training camp on July 30th and the upcoming football season.

He served his country in the United States Navy where he was stationed in Guam in 1958. Garner loved the 1950’s when Elvis was king and hot rods were cool. He had quite a collection of fifties memorabilia and music.

He retired from management at Solar Turbines Incorporated, a Caterpillar Company in De Soto, Texas. After his retirement he attended Rhema Bible College in Broken Arrow, Oklahoma and graduated in 1994. He met Trudy there and they were married in Tulsa. He was an excellent Bible teacher. He especially loved to teach the children. His Mission Statement together with his wife was: “Our commitment, together with parents, is to reach, teach and equip the children to grow, mature, and live their life for the Lord Jesus Christ by teaching them the knowledge and revelation of God’s Word.”

He loved children and seeing them really made his day. Everywh3ere he went he would stop and say “hi” to a child or look at a baby and talk to the parents. Children would smile and wave or come up to him and give him a hug.

Garner, we love you and will hold you in our hearts forever.

The family wishes to extend their sincere gratitude to the doctors and nurses at the Presbyterian Rust Medical Center who took such great care of him while in the ICU.

And special thanks to good neighbors John Ruiz & Rose McKenna, Mike & Patricia Trujillo and Mike. Jr., for all their help, thoughts and prayers, and to Trudy’s extended family for their prayers, help and love.

To order memorial trees or send flowers to the family in memory of Garner Parker, please visit our flower store.