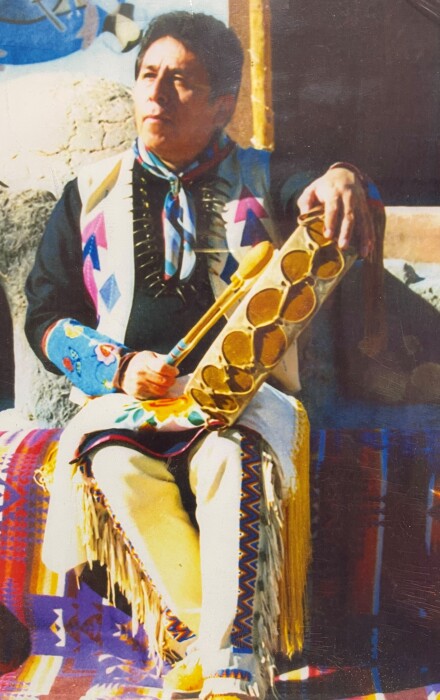 George Flying Eagle Platero Jr. was born on February 2,1952 to George Platero Sr. (Navajo) and Rose Trujillo Platero (Taos Pueblo).  His late grandparents were Adam & Marie Trujillo from Taos Pueblo.  He is survived by his siblings Lawrence, Gilbert and Bernardine Platero. In 1973 George married Loria Nelson at St. Jerome Catholic Church in Taos Pueblo, NM. They had three children Melanie, Michael, and Shane. George had 7 grandchildren, Warren, Monique, Azalea, Memphis, Zillah, Mila and Remy. George was an educator and well known for his cultural richness and traditional teachings. He performed with the Artist of Indian America and was the leader of the Taos Pueblo Dance group.  He was a championship hoop dancer, performing alongside his grandfather the late Adam Red Deer Trujillo.  For over 50 years, George represented Taos Pueblo at the Gallup Inter-Tribal Indian Ceremonial in Gallup, NM. He served as Parade Marshall for the ceremonial in 2017. For most of his life George taught social studies & history for Albuquerque Public Schools and for his community in To’hajillee,NM. With his guidance, his To’hajillee students were able to change the name of the community from Canoncito to To’hajiilee through the State of New Mexico and the Navajo Nation. He will always be remembered for his contributions in education for his community and for his representation of Taos Pueblo. He will greatly be missed as a husband, father, grandfather, and teacher. The family would like to thank everyone for being a part of George’s life.

To order memorial trees or send flowers to the family in memory of George "Flying Eagle" Platero Jr., please visit our flower store.