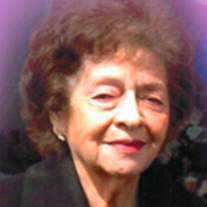 Age 89, beloved and devoted mother, grandmother, great-grandmother, and sister passed away peacefully Sunday, October 23, 2016, while surrounded by her loving family.  She was raised in Llanito, NM and a resident of Albuquerque, NM.  Grace enjoyed gardening, crocheting, flowers, and especially having her children and grandchildren around her.
She was preceded in death by her mother, Lila Martinez; her husband, Thomas Ramon Padilla, Jr., and a brother, Raul Martinez.

Grace is survived by her loving children, Thomasine Montoya and husband Herman, Martin Padilla, and Lorraine Ruggles; three grandchildren, Rafael (Heather), Nicholas Montoya, and John Wayne Ruggles; two great-grandchildren, Hurminey and Talon Montoya.  Also surviving are her sisters, Ramona Mirabal, Genevieve Santiago, Lupe Gurule, and Clarabelle Anaya; and many other loving relatives and friends.  Grace will be greatly missed by her loving family and by those whose lives she touched.

A Rosary will be recited Thursday, November 3, 2016 at 10:00 a.m. at St. Therese Catholic Church, located on 4th and Mildred NW, where the Mass of Christian Burial will be celebrated at 10:30 a.m.  Interment will follow at Mt. Calvary Cemetery.  Pallbearers will be Dale Anaya, Paul Gurule, Robert Mirabal, Steven Mirabal, Joseph Santiago, and Louie Santiago.  Honorary Bearer will be Lonnie Chavez.

To order memorial trees or send flowers to the family in memory of Grace Padilla, please visit our flower store.