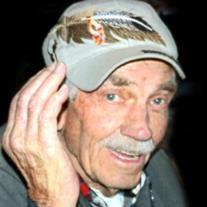 Harold Abraham Schmidt, age 93, a resident of Albuquerque, passed away Wednesday, March 25, 2015, with his loving family by his side.  He was born in Ulysses, KS.  Harold and his family moved to New Mexico to escape the Dust Bowl in the 1930's, when he was 18 years old.  He honorably served in the United States Navy during World War II.  Harold had a small ranch in northern New Mexico, where he lived for many years.  He came to Albuquerque to live with his sister and brother-in-law eight years ago.
He was preceded in death by his parents, Abe and Emma Schmidt; brothers, Herman, Ernest, and Clayton Schmidt; and sister, Dorothy Schmidt.  Harold is survived by his loving sisters, Margaret Schmidt, Norma Johnston; brother-in-law, Mark Johnston; nephews, Mark Johnston, Jr. (Joyce), Gary Rogers, John Rogers (Susan), Douglas Schmidt (Shirley); nieces, Natalie Woods (David), Valerie Contreras (Manuel), Rita Smith (Larry), Linda Rogers (Tim), Beverly Harris; and many other extended family and friends.  Harold will be greatly missed by his loving family and by those whose hearts he touched.
Visitations will be Monday, March 30, 2015 from 12:00 p.m. to 1:00 p.m. in the Chapel of Daniels Family - Alameda Mortuary, 9420 Fourth St., NW, where Funeral Services will be conducted at 1:00 p.m.   Interment will follow at Sandia Memory Gardens, 9500 San Pedro NE.  Casket Bearers will be Jacob Contreras, Manuel Contreras, Larry Smith, Clayton Woods, David Woods, and Weston Woods.  Honorary Casket Bearers are Mark Johnston and Mark Johnston, Jr.

To order memorial trees or send flowers to the family in memory of Harold Schmidt, please visit our flower store.