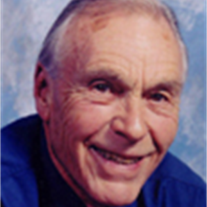 Harvey John “Jack” White, age 93, beloved father and grandfather passed away peacefully, March 3, 2016. Jack was born in Los Angeles, CA on August 26, 1922. A resident of Albuquerque, NM, Jack returned to the Southwest in 1991 after living in Birmingham, Michigan for many years. Jack graduated from the University of Southern California in 1944, and then served on the battleship USS New Mexico (BB-40) as a U.S. Navy Engineering Officer. After WWII, Jack attended the California Institute of Technology, obtaining a graduate degree in Industrial Design in 1948.  A talented designer, Jack started his career at Corning Glass Works where he designed many household pieces for manufacture.  In the mid-1950’s, he was recruited to General Motors in Detroit, Michigan, working as Chief Designer for Frigidaire and as Executive Designer for the GM Futurama exhibit at the 1964 New York World’s Fair. Later, Jack worked in advertising for MacManus, John, & Adams. He completed his career as an Executive in GM’s Industry-Government Relations Department, retiring in 1987.

Jack had true passion for arts & culture. He was a world traveler who sketched and painted throughout his life. Jack will be greatly missed for his love & kindness, intense creativity, and his spark that kept us interested in what came next.

To order memorial trees or send flowers to the family in memory of Harvey White, please visit our flower store.