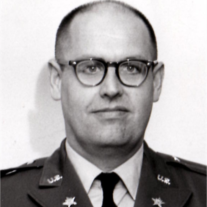 Ret. Lt. Col. Herrol James "Jim" Jr. Skidmore, age 82, beloved and devoted husband, father, grandfather, and brother, passed away peacefully, Thursday, January 21, 2016.  He was born in Denver, CO on June 3, 1933 and was a resident of Albuquerque, NM.  Jim attended West Point Military Academy where he graduated in 1956.  He chose the Army Corps of Engineers and served 24 years; after serving his country, he went on to the New Mexico State University where he was a professor of Engineering for 15 years.

He was preceded in death by his parents, Col. Herrol J. and Eloise Skidmore.   Jim is survived by his loving wife of 55 years, Katherine "Kathy" Jane Skidmore; his son, James C. Skidmore and wife Amanda of Farmington, NM; his precious grandchildren, Christopher, Cameron, and Connor.  Also surviving are his brother, Ret. Col. Frank R. Skidmore and wife Doretha of Vienna, VA; and numerous loving nieces, nephews other relatives and friends.  Jim will be greatly missed by his loving family and by those whose hearts he touched.

In lieu of flowers, the family asks that Memorial Contributions be made to the charity of your choice.

To order memorial trees or send flowers to the family in memory of Ret.Lt.Col Herrol Skidmore Jr., please visit our flower store.