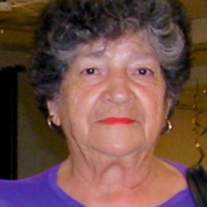 Isabel S. Aragon, age 87, beloved mother, grandmother, and sister, passed away Thursday, December 31, 2015, while surrounded by her loving family.   She was born in Pena Blanca, NM, to the late Gregorio and Bernardita Salas; she was formerly a resident of Cuba, NM and was currently living in Albuquerque, NM.

Visitation will be Friday, January 8, 2016 from 5:00 p.m. to 6:00 p.m. at St. Therese Catholic Church, located on 4th Street and Mildred, where a Rosary will be recited, at 6:00 p.m.  Mass of Christian Burial will be celebrated Saturday, January 9, 2016 at 10:00 a.m. also at the Church.   Interment will take place at 3:00 p.m. at the Cuba Catholic Cemetery, Cuba, NM.  Casket Bearers will be Timothy Maestas, Brian McCoy, Lawrence Borrego, Dominic Aragon, Leonard Zamora, and Omar Fuentes.  Honorary Bearers will be Diego Aragon and Dorothy Partido.

At the family's request, in lieu of flowers, Memorial contributions may be made to: St. Therese
Catholic School, 311 Shropshire Rd., NW, Albuquerque, NM 87107.

To order memorial trees or send flowers to the family in memory of Isabel Aragon, please visit our flower store.