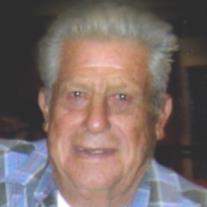 Jim Bruno, age 85,  beloved father, brother, and uncle, was embraced by the Lord and taken to Eternal Life, Monday, September 14, 2015.   He was a lifelong resident Albuquerque, NM.  He graduated from Albuquerque High School in 1949.  Jim was a proud Veteran of the United States Army, who served his country during the Korean Conflict.  He was member of the American Legion Post #69, Veterans of Foreign Wars Post #401; and was a Plumber by trade who worked for the Sun State Plumbing Co. for 25 years.  Some of Jim's hobbies were gardening, especially growing his own green chile; spending time with his daughter and being her photo assistant.  Jim loved his pets and all animals.

He was preceded in death by his parents, Jose and Vicenta Bruno; brother, Henry Bruno; and sister, Barbara Bruno.  Jim is survived by his loving daughter, Elizabeth M. Prusak of Albuquerque, NM; two brothers, Carlos Bruno and wife Hope, Sam Bruno; and numerous nieces, nephews, and other loving relatives and friends.  Jim will be greatly missed by his loving family and by those whose hearts he touched.

The family wishes to express their sincere gratitude to Alliance Home Healthcare and to Home Sweet Home-Roma House for the loving care and support given to Jim and to his family.

To order memorial trees or send flowers to the family in memory of Jim Bruno, please visit our flower store.