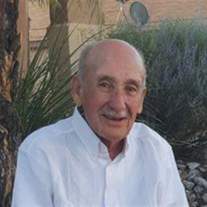 Dr. Perea was a resident of Rio Rancho and a member of Our Lady of Sorrows Catholic Church. He was preceded in death by his wife Stella (Gonzales) Perea. He is survived by his children, Lorraine Valdez and husband Felix of Bernalillo, NM, Richard Perea and wife Masako of Miami, FL, Anna Schneider and husband Fritz of Rio Rancho, NM, James Perea and wife Maria of Las Vegas, NM, Cynthia McRae and husband David of Albuquerque, NM, Deborah Swift of Sierra Vista, AZ; grandchildren; and great-grandchildren. Also surviving are his sisters, Mary Perea Starz and husband Louis and Angela Murphy and husband Pat, his brother-in-laws Erminio Gonzales and Ben Gallegos as well as many other family members and friends.
Joe will be greatly missed by his family and by those whose hearts he touched.

The family will host a memorial and recital of the Rosary Monday, September 5, at 6:00 p.m. at the Daniels Family Funeral Services Alameda Mortuary chapel. Mass of Christian Burial will be celebrated Tuesday, September 6, at 10:00 am at Our Lady of Sorrows Catholic Church in Bernalillo, NM. Interment will be on Wednesday, September 7, at Santa Fe National Cemetery at 1:30 p.m.

To order memorial trees or send flowers to the family in memory of Jose Perea, please visit our flower store.