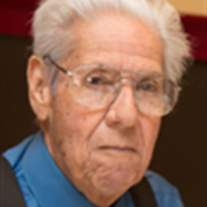 Jose B. Velasquez, Sr. "uncle Bunny", age 80, beloved father, grandfather, and brother, passed away peacefully, Thursday, May 5, 2016. He was born in Santa Rosa, NM and was a resident of Albuquerque, NM.  Jose enjoyed golfing and in his spare time occasionally going to the casino.  He was a member of St. Therese Catholic Church.

He was preceded in death by his wife, Janette P. Velasquez.

Visitations will be Sunday, May 8, 2016 from 5:00 p.m. to 6:00 p.m. at St. Therese Catholic Church, 3424 Fourth Street NW, where a Rosary will be recited at 6:00 p.m.  Mass of Christian Burial will be celebrated on Monday at 9:00 a.m. also at the Church.  Interment will follow at Mt. Calvary Cemetery.  Pallbearers will be Jose Velasquez III, Jeremy Ortiz, Erik Velasquez, Adrian Velasquez, Edward Strader and Tomas Garcia. Honorary Pallbearers will be Manuel Padilla, Carmen Rodriquez, Charles Sandoval, Don Wheeler and Raymond Mora.

To order memorial trees or send flowers to the family in memory of Jose Velasquez Sr., please visit our flower store.