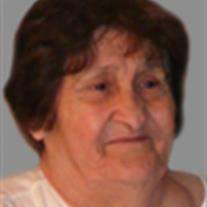 Josie Archuleta, age 84, beloved and devoted mother and grandmother, passed away peacefully, Monday, June 8, 2015, while surrounded by her loving family. She was born in Parkview, NM aka Los Ojos, NM on October 28, 1930 and was a resident of Albuquerque, NM.

To order memorial trees or send flowers to the family in memory of Josie Archuleta, please visit our flower store.