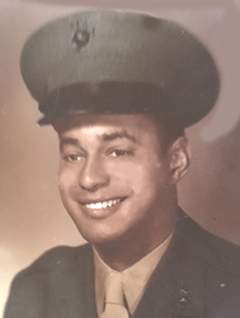 Juan was born in 1928 in San Juan, Puerto Rico to Ramon and Gregoria (nee Flores) Ledoux. He married Carmen Lucinia Mangual-Rodriguez on 12/16/1950 and they remained happy together until her death in 2005. Juan emigrated to the US to continue his education but not before serving honorably in the Marine Corps as a corporal during the Korean War. After his service he went on to continue his education at Brooklyn College (BA) and Fordham University (MSW) where he graduated with honors. Juan spent his professional career as a social worker (NYC Department of Welfare), revenue officer (IRS), and then 28 years with NYS Division of Parole (retiring as Area Supervisor). In addition, Juan also worked as an adjunct professor at Fordham and a field instructor at Columbia University in New York City. Some of his civic achievements include member of the Board of Directors Catholic Big Brothers (NYC), Board of Directors National Assoc. of Social Workers (NYC), and Minority Affairs Spokesperson for AARP. In spite of his many professional affiliations, Juan made the time to be a devoted husband, father, and great mentor to many. His kindness, humor, and generosity will be sorely missed in the world ---he was “a gentleman among gentlemen.”

If considering flowers, instead please make a donation to the Puerto Rico Relief fund with Unidos (by the Hispanic Federation) in honor of the life of Juan Ramon Ledoux.

To order memorial trees or send flowers to the family in memory of Juan Ledoux, please visit our flower store.