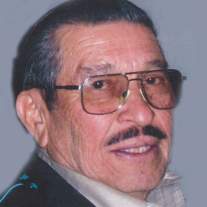 Juan De Dios Martinez, age 83, beloved and devoted husband, father, grandfather, and brother, passed away Sunday, January 15, 2017.   He was a lifelong resident of Albuquerque, NM.  Juan served his country in the United States Army; and was a member of the American Legion Post #69.

He was preceded in death by his first wife, Clorinda Martinez in 1988; two sons, Richard and Ronald Martinez.

Juan is survived by his wife of 12 years, Josie Perea; daughter, Susan Perea; his loving children, John  Martinez; Yvonne Armijo and husband Leonard; his grandchildren, Maria Encinias and husband Santiago, Delicia Martinez, Amber Armijo, Jennifer Martinez; great-grandchildren, Angelina, Estevan, Aliyah, and Delano.  Also surviving are his siblings, Marcella Abeyta, Gloria Medina, and Ricardo Martinez; and other loving relatives and friends.  Juan will be greatly missed by his loving family and by those whose lives he touched.

Visitation will be Monday, January 23, 2017 from 7:30 a.m. to 8:00 a.m. at Nativity of the Blessed Virgin Mary Catholic Church, 9502 Fourth St. NW in Albuquerque, where a Rosary will be recited at 8:00 a.m. followed by Mass at 9:00 a.m.  Interment to follow at Santa Fe National Cemetery, Santa Fe at 12:45 p.m.  Casket Bearers will be Joe Garcia, Rudy Martinez, Jose Martinez, Rudy Chavez, Santiago Encinias, and Lawrence Apodaca.  Honorary Bearers will be Steve Chavez and Danny Martinez.

To order memorial trees or send flowers to the family in memory of Juan Martinez, please visit our flower store.