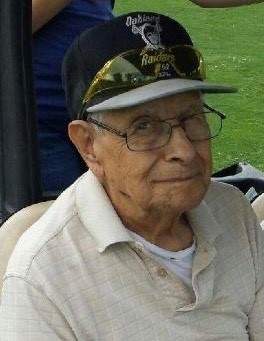 Louis is survived by his daughter, Julie Espinosa and husband Ernest; sons, Lawrence, Jimmy and Johnny Parras, grandchildren, Brenda, Maryann and Jimmy ,6 great grandchildren, 2 great great grandchildren; brothers; Frank, Robert And Wife Edwina Parras, sister; Rosella Vanderhaak; numerous nieces and nephews that were dear to his heart. Also survived by a great friend Jennifer Hogans and Family.  He is preceded in death by his Wife Alice Parras, Father Louis Parras Sr. Mother Cora Parras, Brothers, Alfred, Orlando, Manuel, Ismael. He was born on December 2, 1932 in Albuquerque, New Mexico to Louis and Cora Parras. He was a union carpenter for over 40 years, an avid golfer and also loved his Oakland A’s. Raiders and golden state warriors’ teams. Louis was A member of the United States Air Force Stationed in Europe.

Services will be held at Alameda Chapel on 2/1/2021 at 11:00am under the direction of Carlos Smith

To order memorial trees or send flowers to the family in memory of Louis Parras Jr., please visit our flower store.