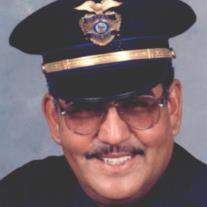 Manuel Padilla, Jr., beloved husband, father, and grandfather, passed from this life on Thursday, July 30, 2015 in the comfort of his home surrounded by his loving family.  He was born November 27, 1935 in Phoenix Arizona to Antonia and Manuel Padilla, Sr., and was a resident of Alameda, NM.  He was raised in New Mexico and attended Our Lady of Sorrows Grade School in Bernalillo.  He attended and graduated from Valley High School as the first Senior Class in 1955.  He Married Sadie Lucero of Bernalillo and moved to California. He worked for Shell Chemical Cooperation and Douglas Aircraft.  Attended Harbor Junior college in Wilmington California.  He returned to NM in 1961 and worked for American National Insurance Company, established a grocery store. He was employed with the City of Albuquerque in 1964 at the Albuquerque International Airport where he was a police officer.  He retired as the first local Chief of Aviation Police for the City of Albuquerque In 1988.   He was a member of the F.O.P., Knights of Columbus, the American Legion Post #69.   He was a member of the Citizens Review Board for the State of NM Human Services Department; a member of the Sandoval County Sheriff’s Posse. Served as an usher at his Church Nativity of the Blessed Virgin Mary and other Church programs.

To order memorial trees or send flowers to the family in memory of Manuel Padilla Jr., please visit our flower store.