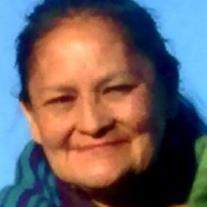 Marguerita Ann Hawthorne, age 53, beloved mother, grandmother, sister, and fiancée,  passed away Thursday, July 16, 2015.   She was born in Fort Defiance, AZ and was a resident of Albuquerque, NM.

She was preceded in death by her parents, Kirby and Marie Hawthorne; brothers, Randall and Doug Hawthorne; and sister, Linda Davidson.  Marguerita is survived by loving children, Eric, Marguerita, Ricky, Demetria, Marie, and Francisca Ballejos; ten grandchildren; her sisters, Eleanor Peshlikai, Regina Kelewood, Lorraine Buck, Gloria Nez, and Jennifer Hawthorne; her fiancée, Raymond Garcia; and other numerous relatives and friends.  Marguerita will be greatly missed by her loving family and by those whose hearts she touched.

To order memorial trees or send flowers to the family in memory of Marguerita Hawthorne, please visit our flower store.