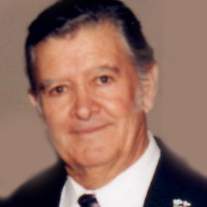 Melecio Jaramillo, age 89, beloved and devoted husband, father, grandfather,brother, and uncle, passed away peacefully, Friday, February 24, 2017, while surrounded by his loving family.  He was born in Jemez Springs, NM on December 5, 1927, to the late Roman and Leonella Jaramillo.  Melecio served his country in the United States Navy from 1945 to 1948. He retired after 42 years of service to the Jemez Mountain Electric Co-op in Jemez Springs.  Melecio also worked as a school bus driver for 25 years.

He was preceded in death by his by two sons, Ramon and David Jaramillo; grandsons, Andrew and Lance Jaramillo; brother, Alex Jaramillo; sisters, Alice Jaramillo and Tonie Garcia.

Melecio is survived by his loving wife of 68 years, Bessie Jaramillo; his wonderful daughters, Rosemary Chavez (Frank), Ida Merhege (John), Lisa Russo (Joe), Paula Jaramillo (Joseph); many grandchildren; sisters, Priscilla Montoya, Connie Jaramillo, Gloria Garcia; brother, Lambert Jaramillo; and other loving relatives and friends.  Melecio will be greatly missed by everyone who knew him.  He had many friends and was known for his kind personality.

To order memorial trees or send flowers to the family in memory of Melecio Jaramillo, please visit our flower store.