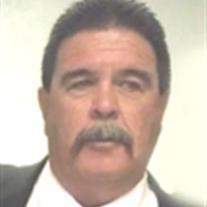 Michael H. Sandoval, age 54, beloved son, brother, father, and grandfather, was embraced by the Lord and taken to Eternal Life, Saturday, June 27, 2015.   He was born in Placitas, NM on January 2, 1961.
He was preceded in death by his paternal grandparents, Juan and Lidia Sandoval; maternal grandparents, Cerilio and Sophia Garcia; and several aunts and uncles.  Michael is survived by his loving parents, Howard and Angie Sandoval; his brother, Leonard Sandoval; sister, Shirley Baldonado and husband Raymond; his daughter Valerie Gonzales; grandchildren, Anthony and Savannah Gonzales; nieces, Amanda Sandoval, Elena and Lidia Baldonado, nephew and Godson, Leonard, Sandoval, Jr.  Michael will be greatly missed by his loving family and by those whose hearts he touched.
A Rosary will be recited Friday, July 10, 2015 at 10:00 a.m. at Our Lady of Sorrows Catholic Church, 301 Camino del Pueblo, Bernalillo, NM, where the Mass of Christian Burial will be celebrated at 11:00 a.m.  Inurnment will follow at the Placitas Land Grant Cemetery.  A Reception will take place after services at the Taraddei Residence in Placitas, NM.

To order memorial trees or send flowers to the family in memory of Michael Sandoval, please visit our flower store.