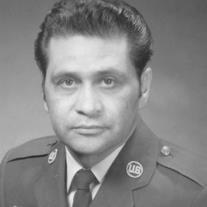 Miguel D. Sena, Jr., of Hephzibah, GA formerly of Alameda, NM, passed away August 8, 2015 after a long illness. Mr. Sena was a 20 year veteran of the United States Air Force serving overseas in Turkey, Ethiopia, Korea and many locations across the United States. An avid outdoorsman, Mr. Sena enjoyed spending time hunting and fishing with family and friends. An active member of the American Legion and the Veterans of Foreign Wars, he was a past Commander of American Legion Post #69 in Alameda, NM.

Miguel was preceded in death by his parents, Miguel R. Sena, Sr. and Lola Sena.  He is survived by his wife of 56 years, Margaret Ann Sena; his sons, Mark and Matthew; and his granddaughter Jordan. Other surviving family members include his sisters, Dora Garcia and Jeanette Gutierrez; his brother, Jerry Sena; many nieces, nephews; and other relatives.

A Rosary will be recited Wednesday, September 23, 2015 at 7:00 p.m. at Nativity of the Blessed Virgin Mary Catholic Church, 9502 Fourth Street NW, Albuquerque, NM.  Service of Christian Burial will be on Thursday at 9:00 a.m. at Nativity of the Blessed Virgin Church.  Inurnment will follow at 12:45 p.m. at the Santa Fe National Cemetery.  Military Honors will be accorded by the KAFB Honor Guard.

To order memorial trees or send flowers to the family in memory of Miguel Sena Jr., please visit our flower store.