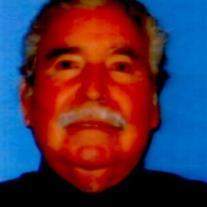 Mike H. Ramirez, age 74, beloved companion, father, grandfather, and brother, passed away Thursday, March 5, 2015.  He was born in Del Rio, TX and was a resident of Bernalillo, NM.  Mike was a Green Beret in Special Forces for 6 years.  Mike made 360 parachute jumps.  He also drove 48 foot trucks across the United States for many years.

Mike is survived by his long time loving companion, Joan Duffy; his children, Michelle, Bernadette, Michael Jr., and Lisa; several grandchildren and great-grandchildren.  Also surviving  are his sisters, Norma and Sylvia Arredondo; several nieces, nephews and other relatives and friends. Mike will be greatly missed by his loving family and by those whose hearts he touched.

To order memorial trees or send flowers to the family in memory of Mike Ramirez, please visit our flower store.