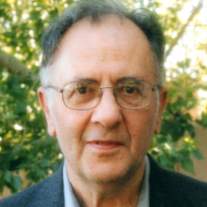 He was preceded in death by his ex-wife Elaine Sorenson; his parents, Louis and Henrietta Liberman; and his brother, Gil Liberman.

A native of New York City, Myron received his Bachelors Degree from City College of New York.  He worked for Trans World Airlines and in sales and marketing for various companies.  Myron and his family moved to Albuquerque in 1970 where he taught marketing and sales at TVI (now CNM) for 25 years.  He received his Master's Degree in Marketing at UNM.

A passionate baseball fan known as "Mike the Met", Myron followed his team the New York Mets avidly throughout the baseball season.

Myron will be affectionately remembered for his wry sense of humor.

Myron was a strong advocate for animal rights and generously contributed to the Animal Humane Society as well as many other animal organizations and rescue groups.

A private Memorial for the family will be held at a later date.

To order memorial trees or send flowers to the family in memory of Myron Liberman, please visit our flower store.