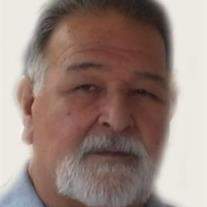 Nazario C. Herrera, age 75, beloved husband, father, grandfather, and brother, passed away peacefully Tuesday, January 27, 2015, while surrounded by his loving family.   He was born in San Isidro Sur, NM on April 20, 1939, and was a resident of Albuquerque, NM.  Nazario's hobbies and interests include, hunting, camping, fishing, playing his guitar, riding his Harley, and especially spending time with his family.  He was a member of Los Guadalupanos (Our Lady of Mt. Carmel) and the Spanish choir at Nativity of the Blessed Virgin Mary Church.
He was preceded in death by his parents, Lourdes and Joe D. Herrera; son, John B. Herrera; and brother, Leroy Herrera.  Nazario is survived by his loving wife of 54 years, Rosina A. Herrera; his children, Joann Herrera, Corrine Herrera and husband John Lucero, and Clyde Herrera; his precious grandchildren, Johnny Jr. and wife Christine, James and wife Jamie, Marcos, Caleb, and Whitney; and nine great-grandchildren.  Also surviving is his sister, Josie Martinez and husband Ronnie; and many other loving relatives and friends.  Nazario will be greatly missed by his loving family and by those whose hearts he touched.
Visitation will be held will be Monday, February 2, 2015 from 6:00 p.m. to 7:00 p.m. at Nativity of the Blessed Virgin Mary Catholic Church, 9520 Fourth St., NW, where a Rosary will be recited at 7:00 p.m.  Final Viewing will be Tuesday from 8:00 a.m. to 8:30 a.m. in the Chapel of Daniels Family Funeral Services-Alameda Mortuary.  Service of Christian Burial will also be on Tuesday at 9:00 a.m. at Nativity of the Blessed Virgin Mary Church.  Interment will follow at Mt. Calvary Cemetery.  Pall Bearers will be Marcos Lucero, John Lucero, Johnny Jr. Herrera, James Herrera, Danny Rivera, Martin Archuleta, Anthony Martinez, Nick Archuleta, and Fernando Cobos.  Honorary Pall Bearers will be Andrew Perez, Angela Herrera, Theresa Rivera, Anita Martinez, and Nicole Wiggins.

To order memorial trees or send flowers to the family in memory of Nazario Herrera, please visit our flower store.