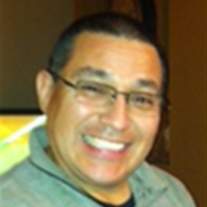 Paul E. Baca passed away at the age of 51 in Navarro, FL on September 23, 2016.  He was born and raised in Albuquerque, NM.  Paul grew up riding dirt bikes and as an adult owned street bikes.  He loved the freedom of riding motorcycles.  Paul also was fond of hiking and running, both of which he found easy to do in either Albuquerque or Richmond.
Paul joined the United States Navy at the age of 22.  While stationed in Norfolk, VA, he learned what would be his primary vocation.  He learned how to paint.  Paul also met his future wife, Genevieve, in the Navy.  He serviced his 4 to 5 year obligation in the Navy and when he and Genevieve left the Navy, they were married and settled in Richmond, VA, where they raised four beautiful children.  Paul supplemented his skills as a painter with learning additional skills as a carpenter.  He pride himself on being able to fix or rebuild anything.  Paul also became a Born Again Christian, and devoted his life to love and serving the Lord.  He enjoyed engaging anyone on his views and the wonder of his faith.

He was preceded in death by his father, Joe A. Baca; his maternal-grandmother, Louise Rivera; and Paternal grandmother, Josephine Montoya.
Paul is survived by his children, Joshua, Jacob, Joy, Julia Baca; the mother of his children, Genevieve Baca; his mother, Lucille Anaya and husband Louie; and his sister Paulette Baca.  Also surviving are many aunts, uncles, cousins and friends.  Paul will be missed but never forgotten.  He will live in our hearts and memories forever.  He will continue to be Paulette's protector, and his now her angel watching over her.  Paul will forever watch and protect all of our family.

Our family would like to extend a special thanks to Eleanor Baca and her children, Cindy, David, Brenda, Lenora, and Denise for all the love and care given to Paul and Paulette while they were growing up.

The family requests, in lieu of flowers or gifts, Memorial contributions be sent to his surviving children at: Joshua or Genevieve Baca, 14504 Sir Peyton Drive, Chester, VA 23836