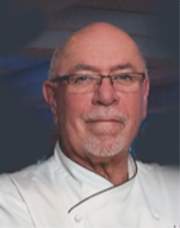 Philip Beltran, beloved husband, father, grandfather, great-grandfather, son, brother, uncle, passed away peacefully, while surrounded by loved ones, on Friday, April 13, 2018.  He was born on December 24, 1949 and grew up in East Los Angeles. He became a permanent resident of Albuquerque in 2008 where he worked at the Hyatt Regency Albuquerque as Executive Chef until his retirement in 2016.

His family and friends deeply mourn the loss of this wonderful man. He mentored many and had a deep sense of family and community.  His was a loving and generous heart! He enjoyed golf, traveling, and a good tequila. Trojan football was his passion. He will be greatly missed and will leave behind memories of a life well-lived.

He is survived by his loving wife of 39 years, Dolores Beltran; his daughter, Dodi and her husband Joe; his precious grandchildren: Cassi, Tom, Vincent, Sammi, Aaron; great grandchildren, Charlotte, Henry Philip. He will be greatly missed by his father, Phil Sr.; his sister and brother-in-law, Terry and Ernie; his nieces and their spouses, Adele, Gabriel, Renee, Robert; and brothers, Steven and Edmund.  He was preceded in death by his mother, Mary Blanche.

The family wishes to thank the staff of the Heart Hospital and the Hyatt Regency for their care and thoughtfulness.

To order memorial trees or send flowers to the family in memory of Philip Beltran, Jr., please visit our flower store.