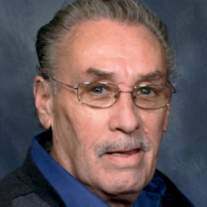 Rafael B. Rivera, age 80, was embraced by the Lord Tuesday, December 29, 2015 and taken to Eternal Life.   He was born in Guadalajara, Mexico on September 25, 1935, and was a resident of Albuquerque, NM.  Rafael was owner and operator of Rincon de Pollo Restaurant.

He was preceded in death by his parents, Leopoldo and Gregoria Rivera.  Rafael is survived by his loving wife of 24 years, Ana Rivera; his daughters, Yadira Luna and Veronica Hernandez; his precious grandchildren, Sonya, James, Lena, Gabriel, and Trinity; his sister, Letticia Corona; other relatives and friends.  Rafael will be greatly missed by his loving family and by those whose hearts he touched.

A Rosary will be recited Tuesday, January 5, 2016 at 8:00 a.m. at Nativity of the Blessed Virgin Mary Catholic Church, 9502 Fourth St., NW, Albuquerque, where the Service of Christian Burial will follow at 9:00 a.m.

To order memorial trees or send flowers to the family in memory of Rafael Rivera, please visit our flower store.