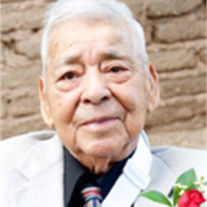 Ramon was born in El Paso, TX and was a resident Albuquerque, NM, where he lived until he was 12 years old.  At that time, he went to live with his Uncle and Aunt in San Diego, California, where he would be raised with his cousins until he was drafted into the service in 1943.  He would travel to Europe on the Queen Mary and served in France, Belgium and Holland.  At the end of the war in Europe, Ramon was traveling by ship to the war in the Pacific and was about to make the trip through the Panama Canal when the war in Japan ended.  He was discharged in November, 1945.

After the war, Ramon returned to Albuquerque and sought out the beautiful young lady that he had met at a Church fiesta in San Jose. He did find Kate and the two were married shortly thereafter.  While serving in the Army, Ramon gained experience in fire-fighting and various air bases in Europe and he worked briefly with the Albuquerque Fire Department before moving to the fire department on Kirtland Air Force Base, from where he would retire as Captain after 30 years.

Ramon and Kate built their own home in Los Ranchos de Albuquerque where they would raise their family. They were members of the Nativity Catholic Church community. After being married for over 64 years, Kate passed away in August 2010.

Everyone that knew Ramon called him Grandpa. He was kind and energetic and enjoyed the outdoors, music, dancing and singing, and loved being around friends and family.  He and Kate bought properties throughout Albuquerque that they would repair and rent.  They thoroughly enjoyed each other’s company and were always together.  They would do oil paintings together, and make craft items.  Grandpa would build the pieces and Grandma would paint them.  They enjoyed traveling to visit his California family and they would go on cruises and road trips together.

Grandpa was extremely proud of his children and grandchildren.  He would play jokes with them on April Fool’s Day; he and Grandma loved to dress up on Halloween.  They had numerous pets through the years.  Since Grandma passed, granddaughter Annette Atencio and her husband Mario lived with him at his home on Green Valley.  He would still paint items that Annette or Mario would make and he made sure Mario kept up with the yardwork.  Recently, granddaughter Lauren held her baby shower where Grandpa would visit with friends and family.  Almost exactly a year ago, Grandpa fell and broke his hip.  Following his stay in a rehab facility, he moved to stay with his daughter Cathy and her husband Danny Zubia in the NE heights.  His journey with us ended peacefully with his daughter Cathy at his side.  We are comforted in knowing he is reunited with Grandma Kate, the love of his life.

To order memorial trees or send flowers to the family in memory of Ramon Fuentes, please visit our flower store.