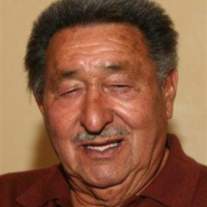 Raymond D. Santillanes, age 83, beloved father, grandfather, and brother, was embraced by the Lord Monday, November 6, 2017.  He was a lifelong resident of Albuquerque, NM.  Ray, Diego, Mr. Santillanes, King of Stucco and other names he was known by was preceded in death by his parents Ambrosio and Rose Santillanes; his beloved wife, Evelyn "Lynn" Santillanes; and brother, Santi Santillanes.

Mr. Santillanes was a proud Veteran who served his country in the United States Army.  Upon completion of his service he became a well-known and respected Stucco Contractor with many attributes and accomplishments to his name.  For over 60 years Mr. Santillanes believed in having a strong work ethic and being a good provider for his family.  However at the same time he was a simple man lived a quiet life, but he always looked forward to hanging out at his favorite casinos.  Mr. Santillanes had many friends throughout the community.  He will truly be missed by many.

A Rosary will be recited Tuesday, November 14, 2017 at 8:00 a.m. at Nativity of the Blessed Virgin Mary Catholic Church, 9502 Fourth St. NW, Albuquerque 87114, where the Mass of Christian Burial will be celebrated at 9:00 a.m.  Inurnment will follow at Vista Verde Memorial Park where he will once again be reunited with his beloved wife.

To order memorial trees or send flowers to the family in memory of Raymond Santillanes, please visit our flower store.