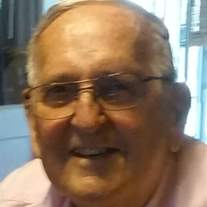 Richard “Dick” Hobson passed away peacefully in his home surrounded by his loving family, Sunday, September 10, 2017. He was born on March 23, 1937 in Richmond, Kansas and raised in nearby Eskridge, Kansas. He is preceded in death by his parents Ray C. and Bertha E. (Riebe) Hobson and daughter Melody Lynn Hobson.
He is survived by Nancy, his wife of 43 years, his sons Rick (Jennifer) and Aaron (Diedra), his daughter, Kimberly, his grandchildren Janna, Jeffery (Elizabeth), Jacob, Joshua, Emily and Jeremiah, his brother Norman (Emily), Columbus, Ohio, sisters Marilyn Mcquay and Carol (Robert) Shumate, Topeka, Kansas and many nieces and nephews.
He served in the US Navy, Construction Battalion 11 as a Sea Bee from 1954-1958 and went on to be a nurseryman in Albuquerque, NM where he worked for Rowland Nurseries for 35 years and many years with Hines Nurseries. In his retirement, he enjoyed spending time with his family, traveling with his wife, spent countless hours in his wood shop, and was a fixture at the Los Ranchos farmer's market.
Services will be held Friday, September 15,  2017 at 11am at Daniels Family Funeral Home 9420 Fourth St NW, Albuquerque, NM 87114. A celebration of life will be held from 1-4pm following the service at Jericho Nursery, 101 Alameda Blvd NW

In lieu of flowers, donations may be made to MD Anderson Cancer Center or VA Voluntary Service.

Your browser does not support this video format. You should be able to view it in Chrome, Safari or Internet Explorer.
To order memorial trees or send flowers to the family in memory of Richard Hobson, please visit our flower store.