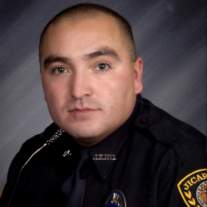 Robert M. Archibeque, Jr., age 41, beloved husband, father, son, and brother, passed away unexpectedly, Monday, May 15, 2017 in Los Brazos, NM.   He was born November 5, 1975 in Albuquerque, NM; graduated from Coronado High School in 1994; attended New Mexico State University; graduated from the New Mexico State Police Academy; graduated from the Federal Law Enforcement Training Center. Robert was employed by the Jicarilla Apache Corrections Department for 12 years and was promoted to Corporal.  He enjoyed being a husband, father, a hunter, a fisherman, and was a North / South Basketball All-Star.

He was preceded in death by his brother, Ben Archibeque. Robert is survived by his loving wife of four years but together for 14 year, Stevie Lyn Archibeque; his children: Elias Anthony, Reyes Isaac, and Amayah Brooke; his parents; sister, Desiree Flores and husband, Lance; grandparents, Sarah Archibeque and Leonarda Martinez.