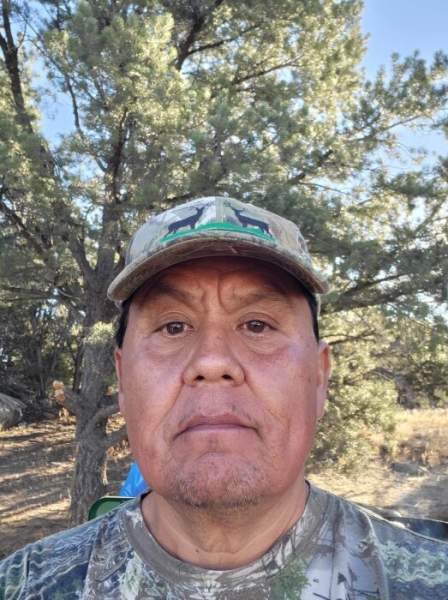 Roderick Lee Miller, “Ron” was called to heaven on August 25, 2022 at the age of 56. Ron
was born in Cleveland, OH. He was a member of the Navajo Tribe, born into the Tabaahi
clan (Water Edge) for the Todikozhi clan (Salt Water).
Ron was a lifelong resident of Albuquerque, growing up in the West Gate area. He attended
Carlos Ray elementary school, onto Truman Middle School and then onto West Mesa high
school where he graduated in 1983.
In his younger years he enjoyed playing in the Westgate Little League; many many stories
told of his childhood with his neighbor friends, and his teammates. Many of whom stayed in
touch over the years.
After high school Ron entered the medical field, first starting at St. Joseph NE Heights as a
housekeeper; Ron was eager to learn new things and wanted to advance his career so he
gradually started with hands-on training, later receiving his certification as a Certified
Surgical Scrub Tech at St. Joseph; he worked at numerous area hospitals such as
Lovelace, UNM, and Presbyterian where his career ended as an Operating Room Surgical
Tech. To the very end Ron was a dedicated hard-working man, always providing for his
family. Throughout his career, stories have been told of Ron, about how he “taught us how
to do things right”, “he was so patience with me”, “don’t screw it up from me”, “do it the way I
taught you”; some were humorous, some serious; but most importantly Ron was always
there for his coworkers, always willing to teach. So many stories to be told of his work
character.
If you knew Ron, you knew he enjoyed the outdoors. He was an avid hunter, a fisherman,
spending the weekends somewhere in the mountains with his hunting buddies; or near a
lake fishing, or riding in a boat. So many great stories of his hunt, most of his prize shots of
elk are proudly displayed in his garage where he loved to tell the story, he never got tired of
telling the same story, being so proud of each one of them. He loved to make jerky and
loved to distribute elk meat to his family and friends. Always willing to share.
Ron was also known to be a great cook, he enjoyed having a BBQ where he loved to grill
for everyone. He would get up in the wee hours of the morning to start smoking the meats,
neighbors knew Ron was grilling when they smell the aroma lingering in the air, this is when
they say “Miller is cooking again.” He would always provide a nice portion of meat to his
father and his nephew on any given day.
Ron would light up any room with his smile, showing off his dimples. He was a kind, loving,
giving person, who would always put others first. He enjoyed spending time with family. He
loved the company of all his friends, he loved to laugh, and make jokes. He was very social
and friendly with every person he encountered.
Ron loved football season, being an OG Washington Redskins fan. It was known when Ron
opened up his garage, this was his announcement of inviting his neighbor and friends to
watch the game with him. Ron was the life of the party. He would give everyone who wasn’t
cheering for the Redskins a hard time, mainly if you were a Dallas Cowboy fan then he
really gave you a harder time. When the name was changed from Washington Redskins to
the Washington Commander he was disappointed in the name and logo selection, saying “I
will forever be a Redskins fan”; “the Commander? Who the heck came up with that name”;
“I will never wear that ugly W”.
Ron had a love for dogs, he would take in stray and lost animals when no one would. He is
leaving behind his precious dogs Sheldon and Shish.
Ron was an amazing loving partner, a father, a brother, a son, and an uncle. He is survived
by his lifelong partner Julie Benally of 31 years, his daughter Justina Lowe. His father
Daniel Miller of Albuquerque, his brother Frederick Miller (Brenda) of Rockville, MD, his
sister Jeannie Miller of Austin, TX. His nephews: Jeffrey Miller, Christopher Miller and Marty
Lind. His nieces: Veronica Phillips (Kurt), Ariel Hernandez (Eduardo) and Jennifer Graves
(Beau).
Ron was preceded in death by his mother, Anne Marie Miller.
A memorial service to honor Ron will be held on September 2, 2022 at 10:00am, at All
Nations Assembly of God located at 1119 Menaul Blvd. NW in Albuquerque, NM.
Cremation has taken place under the care of Daniels Family Funeral Home.

To order memorial trees or send flowers to the family in memory of Roderick Miller, please visit our flower store.

All Nations Assembly of God