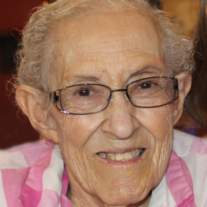 Ruby was born on February 15, 1930 in Vallecitos, NM (present day Ponderosa), a place that she called home until recently.  She lived in her red house at the Baca Ranch from 1947-1954, working for the Bond Family.  She met Robert  W. Hoolihan in Albuquerque and married in 1950 at the Jemez Pueblo Mission.  Ruby worked many years for Bernalillo County where she retired as Food Service Manager for the Juvenile Detention Center.  She was an active and vital member in her church communities of St Therese Catholic Church in Albuquerque and Santo Toribio Mission in Ponderosa, NM.  To know Ruby was to know her appreciation for the farm and ranch life. From cooking and baking to gardening; from quilting to canning; from poker to ditch digging, Ruby was truly one of the old style vaqueras and shared her talents, wisdom and wit with those she came across.

Visitation will be Sunday, August 20, 2017 from 5:00 p.m. to 6:00 p.m. at St. Therese Catholic Church, 3424 4th St., NW, Albuquerque, where a Rosary will be recited at 6:00 p.m.  Final viewing will be Monday, August 22, 2017 from 9:30 a.m. to 10:30 a.m. at Santo Toribio Catholic Church, in Ponderosa, NM, followed by a Rosary which will be recited in Spanish at 10:30 a.m. and the Mass of Christian Burial at 11:00 a.m.  Burial will follow in Ponderosa, NM.  Pallbearers will be Richard Baca, Robert Baca, TJ Willis, Joshua Willis, Daniel Mejia, and Chad Kerner.  Honorary Bearers will be Melvin Maestas and Simon Torrez.   A reception in Ruby's honor will follow the services at the Ponderosa Community Center, all are welcome to join us in celebrating Ruby's life.

To order memorial trees or send flowers to the family in memory of Ruby Hoolihan, please visit our flower store.