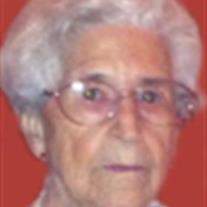 Ruby L. Ortega, age 92, beloved mother and grandmother was embraced by the Lord Tuesday, September 29, 2015 and taken to Eternal Life.   She was born in Wagon Mound, NM and was a resident of Albuquerque, NM.  Ruby and her late husband Marion Ortega were the owners and operators of Ortega Propane Company.  She was a member of Nativity of the Blessed Virgin Mary Catholic Church in Alameda.

She was preceded in death by her parents, Braulio and Lucrecia Thomas; son, Filbert Ortega; daughter, Cathy Chavez and husband Greg; brother, Frank Mora and wife Rosie; son-in-law, Russ Davis.  Ruby is survived by her loving children, Abel and wife Gloria, Cleo Davis, Michael and wife Cheryl, Eloy and wife Sadie, Lawrence, and Charles Thomas whom she raised as a son; numerous grandchildren, great-grandchildren; other loving relatives and friends.  Ruby will be greatly missed by her loving family and by those whose hearts she touched.

Visitation will be Thursday, October 1, 2015 from 6:00 p.m. to 7:00 p.m. at Nativity of the Blessed Virgin Mary Church, 9502 Fourth St., NW, Albuquerque, followed by a Rosary at 7:00 p.m.  Service of Christian Burial will be Friday at 9:00 a.m. also at the Church.  Interment will take place Monday, October 5, 2015 at 3:00 p.m. at the Santa Fe National Cemetery.  Casket Bearers will be Tony Ortega, Charles Thomas, Eloy J. Ortega, David Davis, Greg F.Chavez, and Chris Lopez.  Honorary Bearers will be all her grandchildren.

To order memorial trees or send flowers to the family in memory of Ruby Ortega, please visit our flower store.